Autograph of the Olympic champion up for auction
30. September 2021

Worn by the best. Only top performances allow professional cyclists to get their hands on one of the coveted Tour de Suisse leader’s jerseys. Now it’s YOUR chance!

But we don’t expect you to be a top athlete. It’s more a matter of skill and the ability to make the right bid at the right time. Over the next week, we will be auctioning off one signed copy of each of the leader’s jerseys from this year’s Tour de Suisse for women and men. That’s a total of eight (!) jerseys signed by the best cyclists on the planet. Who wouldn’t like to have a yellow jersey from Vaudoise Insurance with the signature of the 2021 Olympic champion Richard Carapaz? Or would you prefer one of the jerseys of former world champion Elizabeth Deignan?

How does the auction work?
The auction takes place via the ricardo.ch website. Anyone over the age of 18 and resident in Switzerland or Lichtenstein can participate and secure one of the jerseys. Whoever has placed the highest bid at the end of the auction will receive the jersey by post after payment has been received. Different starting prices will be announced for each jersey. Take a look for yourself. Click on the button and you will be forwarded to the auction of the following eight jerseys!

Where do the proceeds go?
One half of the funds raised by the auction will go toward the promotion of Swiss Cycling’s young talent and female athletes. The remainder will go directly to the further development of the Tour de Suisse. The following two support projects will receive a financial boost from Swiss Cycling:

The Foundation for Young Swiss Cyclists – BeCycling – pursues the goal of training and supporting young athletes interested in cycling. For this purpose, the foundation evaluates cycling projects and support programmes in the area of young talent and supports them if they comply with funding guidelines. 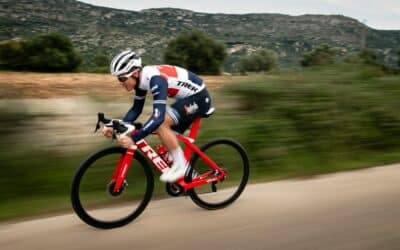 Focus on the future: Trek’s commitment to talent development and gender equality

CommitmentThere are few major companies in the industry that are as committed to the development...